DRIVING WHILE BROWN
Sheriff Joe Arpaio versus the Latino Resistance

Journalists Terry Greene Sterling and Jude Joffe-Block spent years chronicling the human consequences of Sheriff Joe Arpaio’s relentless immigration enforcement in Maricopa County, Arizona. In Driving While Brown, they tell the tale of two opposing movements that redefined Arizona’s political landscape—the restrictionist cause embraced by Arpaio and the Latino-led resistance that rose up against it.

The story follows Arpaio, his supporters, and his adversaries, including Lydia Guzman, who gathered evidence for a racial-profiling lawsuit that took surprising turns. Guzman joined a coalition determined to stop Arpaio, reform unconstitutional policing, and fight for Latino civil rights. Driving While Brown details Arpaio’s transformation—from “America’s Toughest Sheriff,” who forced inmates to wear pink underwear, into the nation’s most feared immigration enforcer who ended up receiving President Donald Trump’s first pardon. The authors immerse readers in the lives of people on both sides of the battle and uncover the deep roots of the Trump administration’s immigration policies.

The result of tireless investigative reporting, this powerful book provides critical insights into effective resistance to institutionalized racism and the community organizing that helped transform Arizona from a conservative stronghold into a battleground state.

“In their new book, journalists Terry Greene Sterling and Jude Joffe-Block tell the story of the Latinx activists who brought about [Arpaio’s] downfall – it’s a smart, well-documented book about a group of people determined to hold the powerful to account.”
—NPR, Books We Love 2021

“Greene Sterling and Joffe-Block do a superb job. . . . Driving While Brown [is] a necessary read that is more than a biography of a blowhard sheriff — it is a chronicle of how seemingly impossible battles are the ones that matter most.”
—Los Angeles Review of Books

“Meticulously reported. . . . A story of hope, however tentative.”
—Arizona Republic

“Greene Sterling and Joffe-Block dive into the real stories of people on both sides of the lightning-rod politician for a gripping and, at times, heartbreaking chronicle of immigration, activism and policing that remains timely today.”
—PHOENIX Magazine

“Driving While Brown is an engaging chronicle of hate disguised as populism, from its short shelf life to how it inspired courageous activists to stand up, push back, and launch a movement that’s remaking our political landscape.”
—Ricardo Sandoval-Palos, PBS Public Editor and coauthor of The Fight in the Fields: Cesar Chavez and the Farmworkers Movement

“In Driving While Brown, Greene Sterling and Joffe-Block expertly fill in the blanks and connect the dots to build a compelling, comprehensive narrative of the immigration battles that have defined and redefined Arizona, offering a window into the ethnic and racial animus in the United States today and the transformative power of hope and purpose shared by younger generations. This is a book for our times.”
—Fernanda Santos, a contributing columnist for The Washington Post and author of The Fire Line: The Story of the Granite Mountain Hotshots

“Long before Donald J. Trump, there was Joe Arpaio, the Bull Connor-esque sheriff notorious for his mistreatment of immigrants and Latinos in Arizona’s largest county. But the authors of Driving While Brown have masterfully documented the previously unknown story of the Latino activists who organized to bring him down and help turn Arizona into a new battleground state. Investigative journalism, storytelling, at its best.”
—Alfredo Corchado, author of Midnight in Mexico and Homelands

“Arpaio is, if it’s possible, even Trumpier than Trump. This splendid book is a lively portrait of a demagogic anti-immigration crusader and the people who helped bring him down. But the authors have nonetheless let Arpaio’s own voice be heard, and have listened carefully to people on both sides of the immigration debate that seems certain to rage for decades to come.”
—Adam Hochschild, author of Lessons from a Dark Time and Other Essays

“This is combustible nonfiction: an irresistible subject, a white sheriff so consumed by the perceived threat of brown immigrants that he’ll defy the federal judiciary. Add two of the best reporters in the Southwest—really, anywhere—and you get a searing, decades-long portrait of racism in America and the criminal justice system that has perpetuated it, and the deconstruction of an ignorant and self-absorbed elected official who is very much like the president who pardoned him. To read this book is to understand America in the twenty-first century.”
—Walter V. Robinson, Pulitzer Prize winner, leader of the Boston Globe’s Spotlight Team that inspired the Academy Award–winning film, Spotlight

Join us for virtual book events

All events are free and open to the public. Watch this space, more events are in the works!

2:00pm AZ&PT/5:00pm ET. Legends of the West. A discussion of DRIVING WHILE BROWN and Bryan Burrough’s book, FORGET THE ALAMO. Registration is free.

4:00pm AZ&PT/7:00pm ET. Book presentation and conversation with Monica Campbell, senior reporter and editor for The World, focused on immigration.

9am AZ&PT/12pm ET. Book presentation and conversation with immigration journalist Jonathan Blitzer of The New Yorker. 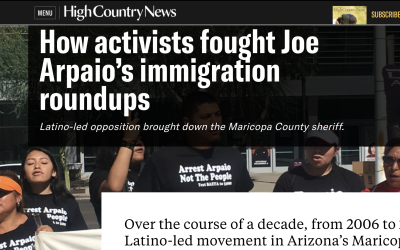 An excerpt of Driving While Brown: Sheriff Joe Arpaio versus the Latino Resistance in High Country News. 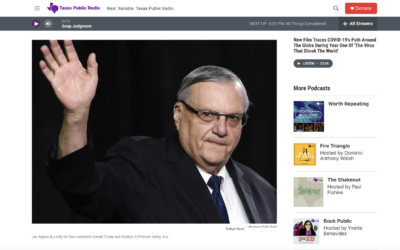 Joe Arpaio, ‘America’s Toughest Sheriff’ For Immigration Enforcement, And The Latino Resistance That Met Him Head On 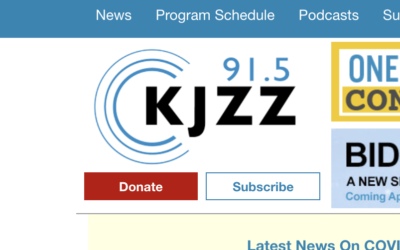 Interview with Steve Goldstein on KJZZ’s The Show. 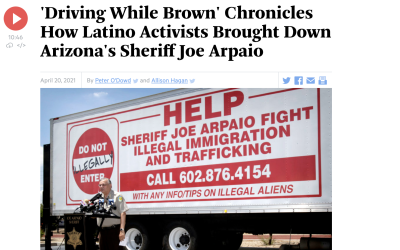 ‘Driving While Brown’ Chronicles How Latino Activists Brought Down Arpaio 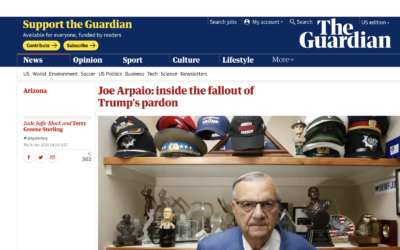 Joe Arpaio: inside the fallout of Trump’s pardon

An adaptation from our new book, Driving While Brown: Sheriff Joe Arpaio versus the Latino Resistance. Read more at the Guardian.

We would love to hear from you. We are also available to join book clubs and for speaking engagements. To reach our publicist: brianne@pressshoppr.com